Well, at least it feels that way. Rewriting Falcons over 18 months wore my brain thin, I tell you. It felt numb and zombified after that project. My goal, during these months of rest, was to write several short stories and revise some old ones that have been lying around the house, but in that state, I couldn't force my brain to think of  a single new idea. Even sleep was dull. I barely dreamed at all, not dreams that stuck with me after waking up, which is really odd for me. I got to worrying, "Is this how it's going to be? Have I lost it? Has my imagination been wrung dry? Will I ever care to write again?" Really distressing stuff. But I waited. And waited.

And here it is. At least for now. This week, my brain seems to have come alive again. Bizarre story dreams prove it. Several nights in a row, dreams that have characters, plots, intrigue, the whole bit, so I guess that means all is returning to normal. One dream was about Janis Joplin, and I'm converting it into a bizarre spec fic. After I type "the end" on that one, I do believe it will be time to drag out Falcons 2 and start looking it over. It's been lying on my writing room floor, collecting dust, and tapping an irritated foot. I had to keep telling it, "Not till July. Give me that long to rest, at least, please." So, here it is, the middle of July, and things are heating up again.

What makes me even more eager to get started on Falcons 2 are the sells on Falcons 1. I never expected the response both volumes have received. Both have made it into the Top 100 Epic Fantasy list, alongside George RR Martin, Stephen King, Brandon Sanderson, Steven Erikson, and Tolkien. Then there are the other self-pubbed authors, like Michael G. Manning, on that list. I feel like my twins are competing with the big boys now, and the feeling is surreal. A little unbelievable. But I'll take it and run, thanks. 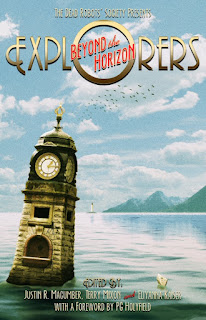 It was May of last year that I posted that my short story "A Mournful Rustling" had been accepted by Dead Robots' Society for inclusion in their  anthology. Well, Explorers: Beyond the Horizon is available at last! The collection features characters forever changed by their discovery of lands and worlds beyond their own. Whether it’s by charting new stars, trekking across fantastical realms, sailing new oceans, or traversing the wild and unknown spaces between dimensions, readers will find the unimaginable in the pages of Explorers. Authors contributing work to the anthology are:

So far, the anthology is available at the following venues:


Now, the interesting part is, if you purchase a print version of this book from Amazon or CreateSpace and email a copy of the receipt  show(at)deadrobotssociety(dot)com, they will send you the ebook for FREE.

I'm so excited to see how this project turned out. I've been waiting on pins and needs since December 2010, when the call for submissions was extended. The results should arrive in my mailbox soon.