The Tepui has arrived! We hijacked family members on Easter to help us bolt her in place atop the Subaru. The name posed the biggest problem. We said it's "TepOOee" like a sneeze. Gesundheit. Of course everyone was curious to know what the tent would look like unfurled, so we unzipped all the goodies and let her fly. Here's the adventure in pics:

So far, we are enormously happy with the purchase. Of course we left the Tepui in place, and now, when I drive around town, I see people in passing cars leaning toward their windshields trying to figure out what I'm hauling. Their expressions of confusion are priceless.

Now to try her out in the field. We hoped to take the tent to Angel Fire, NM, this weekend, but the campgrounds don't open until mid-May. Still so much snow to contend with! So it looks like our trip to Colorado in June will be our first chance to see how the Tepui works for us.

Posted by Court Ellyn at 2:21 PM No comments:


I don't usually (okay, ever) post about my views concerning society, but my heart is aching this morning. For the past two years, I have been living under the certainty that an era has ended and a new era has begun. I have seen nothing yet that contradicts this certainty.

The headlines I read every morning confirm this. The media sells it like a fad that will increase ratings, promoting it. If it is a fad, it is a deadly one. My friends echo it, and I feel a divide beginning to break open between us, because I cannot follow them into this attitude. Ironically, it is the attempt to right wrongs, to cease judgment, that seems to have birthed this anger, this finger-pointing, this violence of word and deed.

Where is kindness? Where is mercy? Where is the attempt to listen and reach understanding? Where is the outstretched hand offering aid, offering encouragement, instead of a stone?

When we throw dirt, we lose ground.

The adventure I looked for and worked for didn't happen (yet), but that's hardly the end of all things. Now we get up, shift direction, and try again. To expand our adventure-output in the meantime, my husband and I have purchased a Tepui.

What is a Tepui?

This is a Tepui!

A tent that rides and unfurls on top of one's car/truck/etc and turns the mundane driving machine into a gypsy-mobile. Our beloved Subaru Crosstrek (called Sandy) is about to get some new digs. She is going to look snazzy with this tenty abode unfurled upon her back.

Our Tepui is scheduled to be delivered on Monday. It is my aim to blog about the adventures involving this tent, including the ugly ones, like setting it up for the first time. And, of course, the beautiful ones, such waking up to views like this: 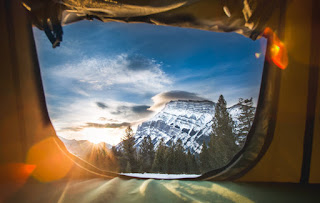 So, Horizon, get ready. We're coming.

Getting On With It


I've identified a stronghold of envy or jealousy in my life. It's hard to admit, but it was even harder to identify and nail down as existing at all. The attitude of "It's not fair" often comes from this flaw of envy. "They have it, I want it, I've even worked my ass off for it, it's not fair."

They have it, I don't. Very well. Get on with it. Or disintegrate into a weepy pile of self-pitying goo.

And so I have. I am pleased to announce that I have broken ground on the overhaul of Blackbird. This overhaul is so massive, so hefty, so down-into-the-grain of the story that the title doesn't even work anymore. I have a backup in mind, but will not yet mention it in a public place. So for now, the working title "Blackbird" will suffice.

After three days of writing, I'm about 6000 words in. The stage is now set for a massive setting move and vast character changes. Gabriella, my protagonist, has been the steady rock through all these upheavals, remaining inwardly largely the same. For purposes of cohesion, I did have to give her a fascination with items from antiquity, like these beauties:


Now Gabriella is almost set to go on her life's journey.

And I have gotten on with it.

And, yes, I am much happier having done so.

Posted by Court Ellyn at 8:30 AM No comments:


I've spent the first half of my life trying to run fast and climb high. The current season in which I find myself is trying to teach me how to bounce. One day I hope to look back and find that I have bounced with grace, humor, hope, and faith.

And not to worry about the bruises I pick up along the way. One can little hope to bounce skyward without first hitting the ground.