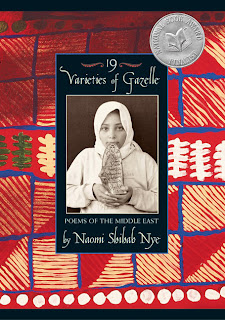 In celebration of National Poetry Month, how could I not write a review of my favorite book of poems?

"Fowzi, who beats everyone at dominoes; Ibtisam, who wanted to be a doctor; Abu Mahmoud, who knows every eggplant and peach in his West Bank garden; mysterious Uncle Mohammed, who moved to the mountain; a girl in a red sweater dangling a book bag; children in velvet dresses who haunt the candy bowl at the party; Baba Kamalyari, age 71; Mr. Dajani and his swans; Sitti Khadra, who never lost her peace inside.

"Maybe they have something to tell us.

"Naomi Shihab Nye has been writing about being Arab-American, about Jerusalem, about the West Bank, about family all her life." 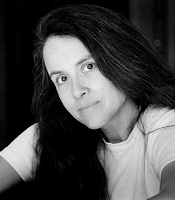 19 Varieties of Gazelle, was released in 2002, months after the attack on the World Trade Center. The collection is clearly close to the heart of poet Naomi Shihab Nye, who was born to a Palestinian immigrant and grew up in both San Antonio, Texas, and the Old City in Jerusalem.

I cannot state it more clearly: I love this book of poems. It's the book I keep on my nightstand and read morsel by morsel in stolen moments when I can stand to have my heart broken and seek to have my spirit lifted by the nobility of day-to-day human existence. These sixty poems are simple and profound. They draw tears from me and put my heart in my throat every time I read them. The words, the images bring people of a far-away culture right into the room with me, and they are not alien but familiar, not "those people" on the other side of the planet, but neighbors. Each poem is a snapshot that shows you details that you wouldn't have seen otherwise. And suddenly the barriers are gone.


It's no wonder that this remarkable collection was a National Book Award Finalist. I love poet William Stafford's statement that "reading her work enhances life." Yes, that's it exactly.

I give a blazing five magic wands to Nye's 19 Varieties of Gazelle:

.
From us celebrating National Poetry Month, "Happy Birthday, Master Shakespeare! You're an inspiration to us all."

For your reading pleasure, a sonnet and an excerpt from my favorite poem, that just so happens to refer to one of the Bard's most beloved works:

Where art thou Muse that thou forget’st so long,
To speak of that which gives thee all thy might?
Spend’st thou thy fury on some worthless song,
Darkening thy power to lend base subjects light?
Return forgetful Muse, and straight redeem,
In gentle numbers time so idly spent;
Sing to the ear that doth thy lays esteem
And gives thy pen both skill and argument.
Rise, resty Muse, my love’s sweet face survey,
If Time have any wrinkle graven there;
If any, be a satire to decay,
And make time’s spoils despised every where.
Give my love fame faster than Time wastes life,
So thou prevent’st his scythe and crooked knife.

From "The Love Song of Alfred J. Prufrock" by T.S. Eliot:

LAST WEEK'S PROGRESS
Chapter(s): 20-22
Pages Revised: 30
Became: 44 pages
Death count: 100+
Good things that happen: Well, at least someone escapes the carnage.
Bad things that happen: The schnizzle hits the fan. Innocence and security are illusions that have been shattered. At last.

In these three chapters, there is so much build-up to the (undisclosed) catastrophe that I was really shocked to see that in the original draft the actual catastrophe was over in less than three pages (?!). That wouldn't do at all. The catastrophe has to equal the weight of the build-up, else a reader might sneeze and miss the payoff, and that will never do. Therefore, I spent several days last week, expanding the carnage. I was trying for a GRRM "Red Wedding" kind of scene, but I'm not sure I nailed it. Nevertheless, it made for disturbing writing. There are good reasons why I don't write hack-n-slash or horror. My stomach, my nerves couldn't handle it. Point is, the bloodshed has begun, and for the Sons of Ilswythe, nothing will ever be the same again. And that's the way we like it.
.
Posted by Court Ellyn at 12:47 PM No comments:

Found Poems are so much fun. It's surprising to me that these are actually legal, given copyright laws, but I'm the last person who will claim to be an expert in copyright law. The poet is not claiming to own the original text, just the poem made out of it, and I guess that makes all the difference.

Yesterday, the first day of National Poetry Month, our assignment at LegendFire was to write our own found poem. I chose a book at random off my shelves, and it happened to be a short collection of Plato's writings. I cracked it open and read, "He says he knows how the youth are corrupted and who are their corruptors." Well, if that is not inspiration for a poignant poem, I don't know what is. So I kept gathering lines that I had underlined in college, and here are the results:

Someone has been prosecuting you?

He must be a wise man

That I am a poet or a maker of gods.
He says he knows how the youth are
corrupted and who are their corruptors.
He must be a wise man.

The youth like to hear the pretenders examined;
they do not like to confess that their
pretense of knowledge has been detected.
He must be a wise man.
Happy the condition of youth if
if
if they had only one corruptor
and all the rest of the world
were their improvers.

He must be a wise man.

A voice
which comes to me and forbids
but never commands,
and this is what stands in the way.

The truth is that only God is wise;
in this oracle he means to say:
the wisdom of men is little or nothing.

I should have perished long ago,
done no good either to you or myself.
I cared not a straw for death
my only fear was of doing an unrighteous thing.
The difficulty is not avoiding death, but avoiding
unrighteousness.

I would fain prophesy to you:

There is reason to hope that death is
a good. Either
death is a state of nothingness, or
there is a migration of the
soul from this world
to another.

The hour of departure has arrived and we go our ways.
I to die, and you to live.
Which is better,
God only knows.

*taken from Euthyphro and Apology by Plato
.
Posted by Court Ellyn at 10:42 AM No comments:

I'm so excited to devote some time this month to exploring and celebrating the time-honored and universal art of poetry. Is there a culture who has not sung its traditions, histories, and mythologies in rhythmic lines accompanied by a harp, a chorus, a dance? Today, we prize "To be or not to be," odes to nightingales, candles burning at both ends, and Bukowski's lines of drunken bitterness. Powerful, memorable, evocative, expressing our darkest hours, our brightest victories, like little else can.

For months now, I've been so driven to make progress on my novel rewrites that I have neglected all other written forms: short stories, poetry, even blogging. But thanks to LegendFire's poetry forum leader, I have the perfect excuse to pause for a moment each day this month and spend time with a poem or a poet or scratching out a few lines of my own. This innovative forum leader brought National Poetry Month to our attention over the past couple of weeks and has put together a month's worth of activities for our members. I'm sure we will be challenged to read, write, and stretch our skills. Will I be brave enough to post my own attempts at poetry here? Or will I keep them tucked away on the forums? I'll post as the whim hits, shall I?

For more information about the annual celebration of poetry visit POETS.ORG
.
Posted by Court Ellyn at 1:40 AM No comments: