.
My weekly progress report is several days late because travel knocked me off routine, but that's okay, right? Last week, my husband and I drove to Austin, Texas, for his work. My work got to take place on the eighth floor of a hotel room with a river view. I've had to learn to enjoy writing from hotel rooms. Years ago, the change in location threw me off, and it used to take a day or so for my brain to adjust and start creating again. But now? Glorious. There are no distractions in a well-placed hotel room. No dishes to be done, no cleaning, no weeding, no shopping, no cats to feed and push off your laptop, no reason to even answer the phone because you simply can't come to dinner tonight, you're out of state, see ya later. 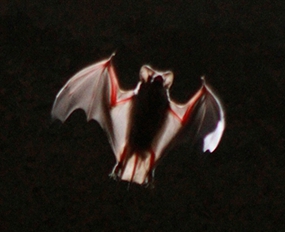 I did not expect to like Austin as much as I did. A lovely city. The best part to me was the natural wonder right in the middle of downtown, all of fifty yards from our hotel. Most people are creeped out by bats, but bats are one of my favorite animals. I mean, c'mon, they're mammals that FLY! And they're furry, and they eat West Nile virus-carrying mosquitoes. So when I heard from a friend that Austin had a colony of bats, I was thinking, "Okay, we'll get in the car, drive to a cave in the hill country, and see the bats." Noooo. We walked out of the hotel, onto the bridge that crosses the Colorado River and experienced the bats. On one side of the bridge, we got to watch an amazing sunset turn the sky and the skyscrapers orange. On the other side, dusk approached. Under the sound of the traffic crossing the bridge, we could barely hear the squeaking as the bats woke up and became more and more excited.

When sunset was almost completely faded and the sky was the right color of lavender-gray, the first bats started darting out from under our feet. Then wheels of bats started circling, and the squeaking became odd little clicks. At last, three narrow columns of thousands upon thousands of bats flew out over the river and into the city. I'm sure I was standing with my mouth and eyes popped wide open. At my house, we have exactly three bats that come out on summer nights and eat our mosquitoes. So I was not expecting clouds of bats. Literal clouds; once they flew out over the city, the three tidy columns bunched up into shifting black clouds. And they kept pouring out, pouring out, pouring out, till after dark when we could no longer see them. 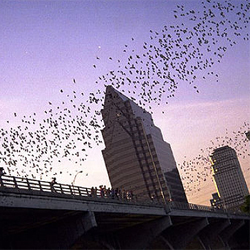 Another unexpected surprise was the scent. Exactly three bats don't put off much perfume, you know. But when thousands upon thousands of bats get the air moving, there is this distinctive sweet, musty odor. I might have chalked it up to some little old lady's odd perfume, but we smelled it the second night as well. The second night was even better, because we walked down the riverside trail and rented kayaks. I had never kayaked before, so I was very glad the river was wide and calm, else I would've ended up in the water with the turtles and catfish. But I stayed in the boat and at sunset we paddled to the bridge. Down on the water, the roar of traffic was much softer and the squeaking of the bats far more distinct. The bridge, we saw, is actually constructed with deep slots made to house the bats, so we couldn't see them until they started flying out.

When the sun dropped behind a skyscraper and the sky turned to lavender-gray, here they came. Three columns right over our heads. I paddled as fast I could to keep up with them as one of the columns followed the treetops along the bank. A second column crossed the river and flew along the water on my other side. Then came that sweet, musty odor and the black shifting clouds as the bats left the treetops and joined up over the city. 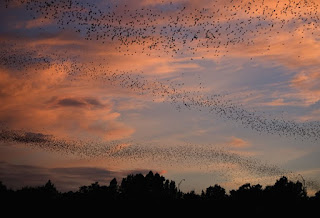 An unforgettable experience. So, if you happen to travel through Austin, take the opportunity to see this amazing nightly nature event right in the middle of downtown.

All that to say that, while in Austin, I finished Chapter 6 and it was a doozie. *whew* But writing more about it here would spoil the bat story.
.
Posted by Court Ellyn at 2:04 PM No comments:

.
Those of you who have been following my blog for a few years may be aware that I love art and collect it in various files on my computer so that I can gaze at it and ponder or sigh or be inspired or what-have-you. Once, I even posted weekly Art History/Appreciation entries. Remember those?

Well, every once in a while, movies or my web searches for new art will cause me to stumble across images that inspire stories or seem to fit ones that I've already written. And as Wordweaver has come to revolve solely around my writing, I thought it might be fun to occasionally post some of these images and a tidbit about the character or setting that they bring to mind.

The image that inspired this blog idea was this one: 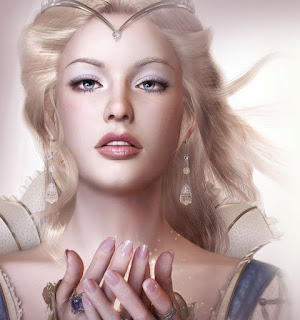 Disclaimer: I know nothing about this image, neither its name nor who painted it, but I would dearly love to know. I found it on some wallpaper site during a random Google search. Please post if you have this information, so I can give credit where it's due and promote the artist with a link.

Point is, the moment I saw this image, I gasped and said, "That's Lyrienn!"

.
Well, last Monday I thought, "This chapter is going to be a breeze. I'll bet I get it finished, plus part of Chapter 6." That was until I saw the need for a new scene, and remembered that I had a contest entry to write for LegendFire. So my contest entry took up the last few hours on Friday, meaning Chapter 5 didn't get finished after all. This is the first week that I've not reached my chapter goal (given normal circumstances). Bummer.

The contest promises to be a fun one, however. We've never done one exactly like it. One of our members proposed a Character Creation Contest, in which we choose between two prompts, flesh out the character in a profile, then write a brief excerpt showing their, um, character. I can't give away too much about my entry before the voting is over, but it resulted in my first-ever piece of flash fiction, so I'm doubly excited about it.


THIS WEEK'S PROGRESS
Chapter(s) of the Week: 5
Pages Revised: 7.5, which became 17
New Scenes: 1, 4.5 pages worth
Good things that happen: Kethlyn and his royal cousin conduct a successful kitchen raid.
Bad things that happen: They end up stuck in a dark, haunted place.
.
Posted by Court Ellyn at 11:27 AM No comments:

.
The last two weeks have been slow going on the novel. First a head cold threw a kink into things, then one of my beloved uncles died. Ah, perspective. There I was, complaining about being unable to breathe or sleep, while my uncle was lying in a hospital battling a Staph infection. After visiting the family and attending the funeral, only halfway recovered from that blasted cold, I was exhausted come Wednesday, and so the writing had to wait yet another day. But here comes Friday and chapter 4 is complete.