SONS OF THE FALCON now available!

.
Hallelujah! It's done. A year of writing and feeling like the novel would never be finished, yet here it is. Finished already. Sons of the Falcon, Book 2 of the Falcons Saga, has been uploaded, approved, and is now available at Amazon and CreateSpace.

It feels amazing, like releasing lead balloons and seeing them fly weightlessly into the sky. And now? Do I ever need a vacation. My brain is shot, so I plan to spend the holiday months reading, refueling the brain cells, and maybe writing a couple of short stories if the inspiration strikes me. Then in January, I hope, work on the last book will begin. Fury of the Falcon is going to be quite a beast, let me tell you. Probably the longest of all the volumes, and the old draft is full of issues that must be fixed, which means lots of changes. Can you tell I'm trying not to be intimidated? But for now, I shall bask in the feeling of accomplishment...

Currently, the print edition of Sons is only available at CreateSpace. It will take a few more business days for it to become available at Amazon. It's priced competitively at $14.99. And like both volumes of Book 1, Sons is only .99 cents for a digital download. This weekend (Friday through Sunday), however, it will be available for FREE! So be sure to keep an eye out and an e-reader on hand, so you can download yours.
.
Posted by Court Ellyn at 9:39 PM No comments: 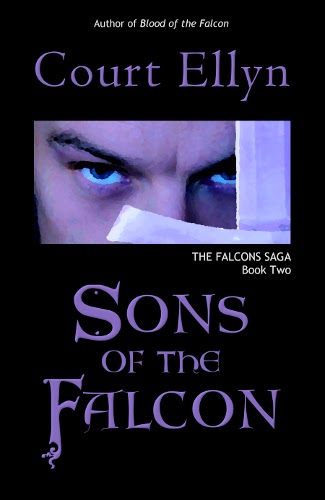 .
Recap of The Perfect Player:

“A forbidden tryst exposes a threat and sets a secret plan in motion, and twenty-year-old Marisa of Mynae discovers her life is all a lie. But even as a cryptic journal reveals her true purpose and a trail of hoofprints leads her to a demon renegade, Marisa balks at fate's course until evil devours her people and imperils her father's life. Only then does she learn what it takes to play—and win—a deadly game of predator versus prey.” – Imagination Ether Press

Two weeks ago, I posted a review of The Perfect Player, the upcoming dark fantasy novel of Connecticut author Devon Winterson. Currently Devon has several novels in the works, most of which take place in the world of Caendoria. Other projects include co-writing a middle-grade novel with her son, editing for a small publishing company, and moderating at Writer’s Beat, a growing online community for writers, for which she contributes to the quarterly e-zine. She also happens to have a passion for golden retrievers.

This week Devon graces us with a brief interview. While reading The Perfect Player, two questions kept springing to mind. Where did this come from, and where is it going? I suppose I’m fascinated with the mysterious, vibrant labyrinths of other writers’ minds. Read on for Devon’s crackerjack replies:

Court: The whole time I was reading The Perfect Player, I kept wondering what initially inspired this world and the story. So can you tell us a little about how this world came to be and how these characters sprang out of it?

Devon: Initially, this all started with a short about a young woman who severely injures someone after driving home drunk. She consequently dies in the crash, and is sent straight to the underworld to “pay her dues,” where she meets a sympathetic demon who hears her plight, reasons things out, and sends her back so she can set things right.

The Perfect Player and its subsequent stories kind of just morphed from there, I suppose, into what it is now: Nothing like the original short story—at all. Except for the demon and the young woman, who eventually turned into Locrian (the demon) and Marisa of Mynae.

See, my muse led me down a totally different direction with those two, and from there, everyone else took shape. I planned nothing at the outset—neither the world, nor the people. I just sat down and wrote, and story events simply started to materialize. So I wrote them all down as I saw them pop into my imagination. Of course they were all jumbled and stupid at first, with half the events completely illogical and my writing skills at basically zero. But over the span of a decade I learned, listened, and practiced, then honed the first story into what it currently is.

In fact, starting on November 9th, I’m hoping to post up a successive trio of blog posts leading to the November 11th release of The Perfect Player, wherein I tell the (not-so-true) story of how everything came about, muse included. It’s a humorous take on it all, and it kind of shows my crazy side.

Court: *laughs* I’m looking forward to reading those posts. Now, The Perfect Player ends with full resolution, yet it's open-ended too. Without giving away any spoilers, can you tell us where you see the world and these characters headed in the future?

Devon: Honestly, I see them all going backwards. Throughout my entire series, I work with a retrograde timeline where The Perfect Player (first book) is actually the finale to an overarching set of events; the middle trio of tales take place numerous years before the various happenings in The Perfect Player and all occur at the same time, told through different points of view (the reader meets these characters in The Perfect Player); and book five, the last tale, is what starts it all, sets everything into motion, told through the viewpoint of the world’s creator, wherein various scenes from the previous books are revisited with a fresh understanding and interwoven through the creator’s own story. The last one I project will be one huge, huge book, probably a handful of volumes, I suspect, if not more, and very hard to construct as that particular main character is horribly cryptic and difficult to figure out.

So it seems we readers have a lot more to look forward to. The vibrant world of Caendoria is about to flood the Indie market with magic, darkness, and adventure. Look for The Perfect Player on November 11 at Amazon, both for e-readers and in print. In the meantime, keep an eye on Devon’s blog at The Ether of My Imagination for those upcoming posts about her novel, and find collections of her short fiction at Imagination Ether Press, Goodreads, and Smashwords.
.
Posted by Court Ellyn at 1:00 AM No comments:

Read more »
Posted by Court Ellyn at 1:00 AM No comments: