As if the cruise up the Nile wasn't special enough, there are a few highlights that stand out. I even captured a few of them on camera. 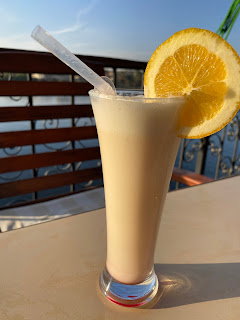 After returning to the Medea with feet throbbing from a hectic morning of sightseeing, how refreshing it was to get showered and head up to the sundeck where Ahmed or Islam were tending bar.
The pina coladas featured fresh coconut. When I wasn't interested in a cocktail, coffee was always on tap. For the first time I tried Turkish coffee, fragrant with cardamom. I loved it so much that the first thing I did upon returning home was order me a Turkish coffee set. I still can't get the foam just right. 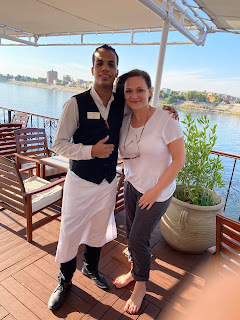 This is Islam. Amazing how the waitstaff responded when guests treated them as people rather than "servants" whom they seemed to prefer to be invisible. The best time on board the boat was interacting with these guys, getting to know them a bit, even allowing them to drag me out on the dance floor (I don't dance, so it was a huge deal, but how do you tell these guys no?). Treat these guys well, and they return the favor by surprising you with coffee before you think to ask for it. And Islam here was so excited to show me his hometown, Ar-Aman, as we sailed past. 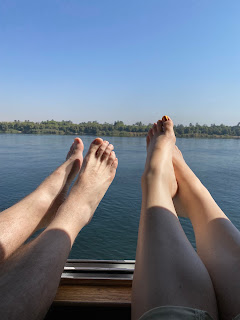 Downtime was enhanced by our cabin's huge sliding windows. Once the afternoon shade hit our side of the boat, we escaped the Egyptian sun and enjoyed the cool breeze on our tired swollen feet. How often I had to remind myself that landscape drifting slowly past was, in fact, real. That we were actually lounging on the Nile itself. 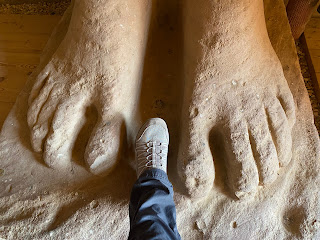 At Rameses' temple at Abu Simbel, I dared approach the pharaoh so we could compare feet. His will be around a lot longer than mine, but I advised him to get a pedi.

It was hard to leave.

Not just the boat, but the group of people we traveled with. One dear lady, who quickly became the heart of the group, was returning to Egypt after 40 years. She eagerly shared her rich memories and closed a few doors that missed opportunities had left gaping. She had been through much during her long life, and I urged her to write her story. I hope she does. In return, she practically adopted my husband as her son, and took this beautiful picture of us on our last evening on the Medea.

Would I return to Egypt? In a heartbeat. If the world doesn't mess things up, maybe I'll get the opportunity. Until then, I shall revisit it in my memories.