Review: The Map of Time by Felix J. Palma 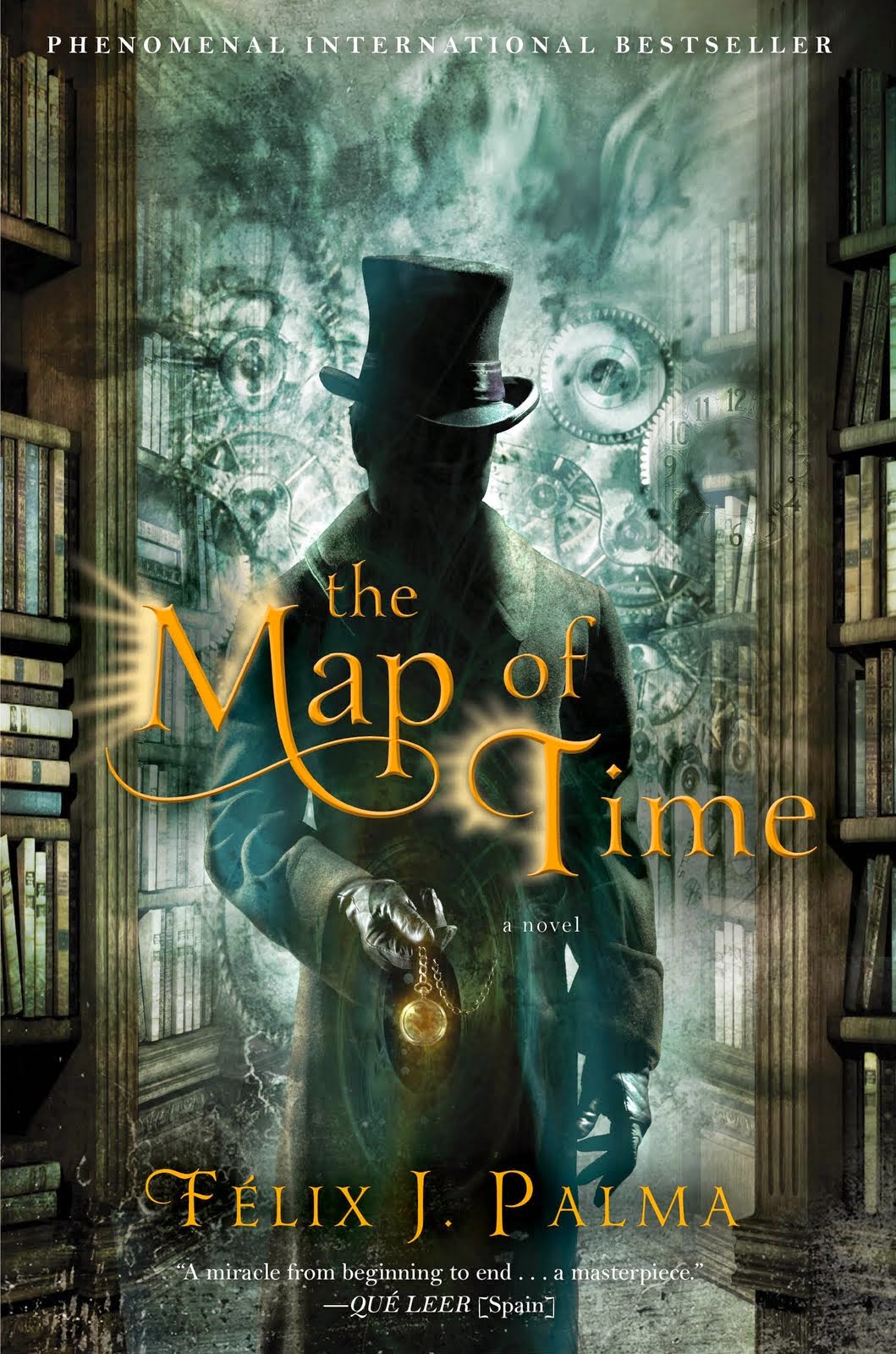 Blurb:
Characters real and imaginary come vividly to life in this whimsical triple play of intertwined plots, in which a skeptical H. G. Wells is called upon to investigate purported incidents of time travel and to save lives and literary classics, including Dracula and The Time Machine, from being wiped from existence.

This spring I was on a desperate hunt for new authors to explore and happened upon what looked like a Steampunk novel sitting on the literary fiction shelves. “What’s that doing here?” I asked and picked up a copy to examine (yes, I judged a book by its cover, and I’m glad I did). The ensuing adventure was more than I expected.

Several elements of this novel struck me as noteworthy. That “whimsical triple play of intertwined plots” is the first. One of the main reasons I have not attempted to write a time travel story is the complex plotting that must surely be involved. The Map of Time provides an intimidating example of exactly that.

Part 1 centers on Andrew Harrington, a wealthy young man who has fallen in love with a prostitute from Whitechapel. As the names of characters and setting were gradually revealed, I began to cringe. History recap: Victorian England + prostitute + Whitechapel = Jack the Ripper. “Oh, Lord,” I groaned, anticipating what must surely be coming, “is this a Jack the Ripper story?” I hadn’t bargained for this. I was expecting steam engines and, well, time travel, not a plot involving the most notorious serial killer of all time. Indeed, Andrew Harrington turns to H.G. Wells for help, hoping to travel back in time to save his beloved from the Ripper’s blades.

Part 2, fortunately, moves away from the gore, and brings us to Claire Haggerty, a proper lady who is wholly disgusted with her life and the stifling mores of Victorian society. When she hears of an opportunity to travel to the year 2000, she eagerly jumps on board. In the future, she finds the man of her dreams. But can she keep him without irreparably damaging the fabric of time? Only the author of The Time Machine, who must be an expert on the subject of the time continuum, can help the lovers find a solution.

In Part 3 … well, I won’t give spoilers. Suffice to say that in this gripping conclusion, H.G. Wells must make the most difficult decision imaginable. It involves a letter from his future self, three famous novelists, and a heat ray gun. Which thread in the time continuum will Wells choose? Or is choice ultimately irrelevant?

That brings us to the second aspect of the novel that impressed me: the science of time travel. This is another reason I haven’t attempted to write a time travel story. The possible loops in time and splits in universes are just too big for my brain to fully comprehend. Some of Palma’s explanations and theories I just had to swallow because puzzling them out in my head threatened to make me dizzy. There are far too many fans of time travel for Palma to explore the theories and problems in any way he chooses. Had Palma done so, those fans and theorists would be able to call him out. Given to my own limited education on the subject, there’s nothing to criticize him for, and therefore, the story and its conclusions remain believable.

The third noteworthy aspect might have made an impression on me merely because I write. Through his rendering of H.G. Wells, Palma beautifully expresses insights into a writer’s life and psyche:

“…no other pleasure Wells could think of gave him a greater sense of well-being than when he added the final full stop to a novel. This culminating act always filled him with a  sense of giddy satisfaction born of the certainty that nothing he could achieve in life could fulfill him more than writing a novel, no matter how tedious, difficult, and thankless he found the task, for Wells was one of those writers who detest writing but love ‘having written.’ …


"… for Wells the act of writing was much like a struggle, a bloodthirsty battle with an idea that refuses to be seized.” (p. 534)

“He was back at the point of departure, at the place that filled writers with dread and excitement, for this was where they must decide which new story to tackle… At that moment, before reverently committing the first word to paper, he could write anything he wanted, and this fired his blood with a powerful sense of freedom, as wonderful as it was fleeting, for he knew it would vanish the moment he chose one story and sacrificed all the others.” (p. 676)

“That’s it, exactly!” I kept saying. Never before have I read explanations of what it’s like to be a writer in such clear, powerful language.

The only drawback I was able to pinpoint in the novel was that the ending seemed a bit drawn-out. I can’t go into detail without spoiling things, but suffice to say that I understand the reason that the mundane must follow the extraordinary, and so there lies the ending’s redemption.

People have been fascinated with the idea of time travel ever since it was explored in Wells’ novel over a century ago. Palma takes what has since become a common science fiction theme back to its literary source and winds a whole new adventure around it, turning H.G Wells himself into an unlikely hero. More, the novel is exquisitely translated from the Spanish. My standards of competent language are quite high, and this novel does not disappoint on that count either. Nick Caistor, the translator, and presumably Palma himself manage to present the story in language as it would have been written at the turn of the 19th Century.

And so, The Map of Time impresses me on many different levels. I recommend the book to anyone interested in time travel, adventure, and fine writing.


Find The Map of Time at Amazon, B&N, and many other booksellers.