"The Witch of Mistletoe Lane," Part 2 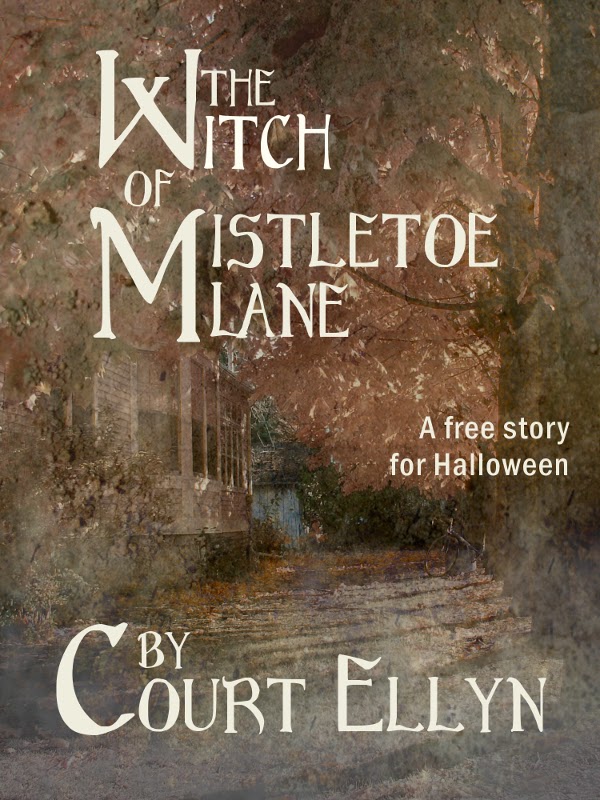 We didn’t stop running till we reached the school yard. The swings and teeter-totters for the elementary kids looked like the most benevolent place in the universe. Jimmy collapsed on the merry-go-round and sobbed. “I’m doomed. I didn’t know it was her cat. Ah, God, I didn’t know.”

“You’re not doomed, Jimmy,” Tyrone said, sitting beside him, fingers clasping the metal bar between them.

Jimmy ignored him. “, you know. You saw what happened, and now my dad’s in a wheelchair, and it’s my fault. Ah, God!”

I couldn’t argue. I just stared at the deep wallow that hundreds of feet had dug around the merry-go-round and listened to him sob.

“My mom’ll be next. She’ll die of the plague or something and I’ll have to go live with grandpa. I hate cows!”

“What’s he talking about, Colt?” asked Adam, looking sicker than ever. I told him and Ty about the rock Jimmy threw all those years ago.

“I never had my tonsils out,” cried Jimmy. “I don’t want to go back to the hospital. The food’s terrible and those nurses treat you like meat, then they hand you a balloon like everything’s gonna be okay, but it’s not. I’m doomed.”

I sighed. “Well, this time we’re all doomed together. Maybe the curse will just stick to us and not bother our families. We can die heroes.”

“You think she’ll eat us?” asked Tyrone. “My Auntie Tisha said the witch had a sister who used to live with her. But they fought and the witch poisoned her and fed her to them cats.”

“Nobody’s gonna eat us, Ty,” I said, though my tone lacked conviction. “Y’all come sleep over at my house tonight. We’ll go to church in the morning and pray that the curse don’t take hold.”

“What about Trev Reynolds and the others?” Tyrone asked. “We gotta bring ‘em a cat, or they’ll kill us before any curse will.”

I had to puzzle that one out. “We’ll sleep with the slingshots.”

“We only got two!” cried Adam.

“Okay, go get it, and be at my place by dark.” I’d rarely felt so exhilarated. All we needed was an Ennio Morricone soundtrack playing in the background. On top of dodging bullies and waiting for the shootout, we’d been cursed to boot. Life couldn’t get more adventurous in Saint Claire.

We sat in a solemn row on the front pew of the and prayed like we had never prayed before. The preacher kept eyeing us during the sermon, suspicious of our sudden devoutness, but for once we didn’t have any pranks in mind. In fact, we were a bit delirious. None of us had slept too well. Near , Adam swore he heard Randy’s truck growling past the house, and the streetlight shone through the oak tree on our front lawn, casting a shadow across my wall that at looked just like the witch’s wild black hair.

We parted ways. I can’t explain the sorrow I felt when I considered that I might never see those guys again. Peering in the rearview mirror, Dad saw me moping and asked, “Guilty conscience, kiddo?”

“Nah, I just don’t feel too good.” At first I thought it was just a lie, to get out of explaining the curse, but the more I thought about it, the more I really did feel queasy. The certainty struck me that a tumor was growing in my guts. I was sure it was already the size of a baseball.

My little sister scooted as far from me as the car door allowed. “Don’t you puke on me, Colton Brisby!” Melissa crossed her index fingers to ward off the evil of invisible germs.

Mom turned around in the passenger seat and frowned. “I’ll pick up some Pepto when I go in for the milk.”

“No, Mom, I’m fine.” How to explain that I was dying and Pepto Bismal wouldn’t help? We pulled into the lot of the grocery store, and Dad kept the car running while Mom and Melissa went in. I squirmed in the backseat for a minute before deciding that sitting still thinking about it was a bad idea. I hurried after Mom and offered to push the cart. She looked at me like I’d lost my mind, then smiled and humored my moment of selflessness. She put a bottle of Pepto in with the milk, the box of Rice o’ Roni, and several bags of Halloween candy. When she hurried ahead, I discreetly put the Pepto back on the shelf and pressed at the achy place in my stomach where the tumor was sucking the life out of me.

At the checkout counter, ol’ Mrs. Beals dropped our stuff into plastic bags while she ooh’d and aw’d over how big Melissa and I had gotten. Melissa rolled her eyes, because Mrs. Beals told us that every Sunday. I thanked Mrs. Beals, polite as I could, hoping to earn God’s favor. Then at the next counter, I glimpsed a flutter of fingers that snagged my attention like a grub on a hook. A woman flashed some hand signs just like the witch. A little girl who could only be her daughter, flashed more signs in reply.

The woman across the way straightened and looked at me as though I’d given her the finger, then wrapped a protective arm around her daughter. My own mother pinched my arm, like she did when I misbehaved in church. “Shh, what’s wrong with you? For goodness’ sake.”

My face burned, and I slouched out of the grocery store. Climbing into the car beside me, Melissa said, “That’s . She’s new in my class this year. She’s mostly in special ed though. Some of the boys made fun of her at first, but they got sent to the principal’s office. I think she’s real nice.”

I’d rarely felt more like a complete idiot. Such was our terror that none of us had recognized the obvious. The witch wasn’t cursing us. She was probably cussing us out in sign language. She probably wasn’t a witch at all, and there we were running scared from a deaf woman. Brave cat hunters, indeed. Damn.

By the time we pulled into the driveway, my tumor was gone.

Adam sighed and sagged against the wall.

Jimmy crossed his arms and looked disappointed. “Deaf or not, I still think she’s a witch. My dad’s still in a wheelchair.”

“He fell off a roof, Jimmy,” I said. “That could happen to anybody. And lots of people have their appendixes taken out. It don’t mean she cursed you.”

“Like hell it don’t.” Sulking, he went in to class.

Adam came to attention and fled in after him. A crowd of High Schoolers approached. Books that weighed a ton looked small under their arms. In their midst, Trev Reynolds pointed at Tyrone and me, and those cool snake eyes promised retribution for disobeying his order about the cat.

A crowd of cheerleaders tagged along behind, giggling and fussing with their makeup. Elizabeth McDuffy fluffed her red hair and looked just like a model in a Pantene commercial. I swear her green eyes met mine, and I felt ten feet tall. I couldn’t act scared in front of her. Instead, I stuck out my chin and pointed right back at Trev Reynolds. He threw back his head and laughed. “I’m gonna smear you into the pavement, Brisby. You and all your little girlfriends.”

Tyrone grabbed my finger and hauled me into algebra.

For third period, Mrs. Demitri took her English class to the library, where we had to choose something to read for the end-of-semester book report. I hated book reports more than long division. I even hated them more than the cafeteria food, which is saying a lot. We browsed through the achingly dull novels, groaning and fighting the urge to flee the building. I curled my lip at titles like The Good Earth and To Kill a Mockingbird and almost settled on Shane, because my dad liked the old Alan Ladd movie, but a little farther along, the word “witch” caught my attention. I slipped the book off the shelf and gave it a suspicious look-over, expecting to find a trick lurking inside. The Witch of Blackbird Pond. Hmm … award-winner, skinny, and look at that! The author’s name was . Couldn’t go wrong with that. While the librarian stamped the date on the inside for me, I began to regret my choice. I didn’t need a reminder of the witch. My tumor might be gone, and my family was surely safe, but I remembered the way that black cat hobbled home, and the look on the witch’s face as she scooped him up. I felt sick now for a whole new reason.

“We have to go back and apologize, guys.” We gathered around one of the tables whose scarred plastic chairs were always too small.

“Apologize? For what?” asked Tyrone.

“Shhh!” hissed Mrs. Demitri. I sat back in the tiny chair and sulked. I didn’t want to go to the witch’s house by myself, but it seemed I had no choice. Searching the shelves in the reference section, I found a book on sign language. With the few minutes left of third period, I practiced making the letters and a few other signs. All the while, I knew I was putting my life at risk. The witch was said to have fed her own sister to her cats, after all. After what we did, she might decide to turn me into Meow Mix next.

For the rest of the day I practiced the signs under my desk, though I forgot half the letters by the time the bell rang. After fetching Melissa from the front of the Elementary building, I hurried home. Melissa got mad at me for leaving her half a block behind, but I didn’t listen. I blew through the house at top speed.

“Where you going?” Mom called after me.

“Do your homework first!”

I was out the door and on my bike before she could stop me. The temperature had dropped throughout the day, and the sky was a gloomy gray. My fingers were numb by the time I reached . Swinging off my bike at the end of the street, I stared at the horror of a house as if inside death was waiting for me.

(continued next week in Part 3)

"The Witch of Mistletoe Lane" copyright 2011 by Court Ellyn. No part of the story may be reproduced without written permission of the author.

Email ThisBlogThis!Share to TwitterShare to FacebookShare to Pinterest
Labels: antho, ebooks, holidays, Past the Patch, publications, short stories, The Witch of Mistletoe Lane