A few weeks ago, I wrote about my new kitten Jet. He's turned out to be a near-purrfect companion: quiet, confident, brave, cuddly, playful, likes traveling, doesn't mind a harness and leash. The only problem is his tendency to chew on his toy of choice: me.

The issue became so extreme that unless this kitten was asleep, I couldn't reach out to touch him without his eyes going all pupil and his little body springing to attack my hand. When I'd pick him up to carry him, he would even bite my face. Stern and consistent discipline didn't deter this hunter's-instinct-gone-haywire.

This is no way to live with a cat for the long haul. I was heartbroken. My options were to ignore him for the next 15 to 20 years, take him to a shelter, or get him a friend. The latter option was not really on the table because my husband and I had spent the last several years juggling multiple pets, and we didn't want to repeat the hassle. Plus, it would be easier to travel with one cat instead of two.

But the first two options were too dreadful to contemplate.

Then last Friday, I was running errands, one of which was going into the pet store for a new carrier. Our old one is literally being held together with duct tape. As soon as I walked in the door, I said to myself, "Just peek at the kitty cages, and see if there are any kittens near Jet's age and size."

Mind you, my husband had no idea what I was up to. I had made no conscious plan to get a second cat. But perhaps my subconscious had planned it all along? Maybe the search for a new carrier was all a ruse?

All counted, the store had SEVEN kittens that were Jet's age and size. I had never adopted a kitten from such a place, never had to (all our cats just showed up on the doorstep), had heard bad things about doing so. But I was desperate, and all these babies needed a loving home. So I asked the cat lady, "Are there any boys?"

She started handing me kittens.

After looking them over, I brought home this guy: 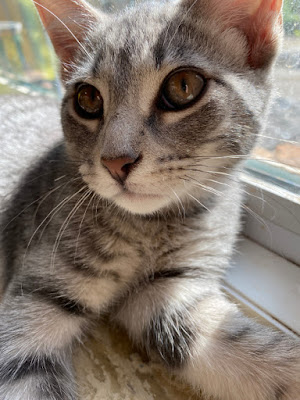 I walked into the house and set the carrier box down at my husband's feet. I said, "Meet Echo." What could he say at that point? Luckily my niece had come home with me, so he kept his mouth shut until his brain had adjusted to the idea of a second pet.
My intention was to keep the two critters apart for a few days until Echo had had the chance to adjust to his new surroundings. But by accident and oversight of a door left open, they met almost immediately. Ever since, Echo and Jet have been inseparable. Bosom buddies.
The chewing on Mom stopped. The house is a happy place again. And my husband is kinda in love with them both. All's well that ends well.
Now to see if Echo likes the car...