Jet and the Bumblebee

My kitten Jet discovered bumblebees today. I was walking him in the garden this morning, for some leash training, and the bumblebees were buzzing happily among the Lamb's Ears, which are currently in full bloom. What kitten isn't fascinated with toys that move on their own and bob within easy reach?

"You'd look pretty funny if you got stung, buddy," I tell him.

I tug him in a different direction, then pause to investigate a plant growing where I may not want it. While I'm debating on whether to pull it as a weed or leave it and see what it becomes, Jet gives a yipe and darts to the full extension of his leash. He's a little guy, but he bolted with such force that he pulled me after him.

Sure enough, a bumblebee is rising off the ground and continuing on its merry way. Jet is shaking his paw and licking it madly. It starts to swell almost immediately.

It's not often you can see degrees of emotion in the contemptuous face of a cat, but Jet was clearly angry. He curled up on my lap and glared at nothing. His tail twitched a bit, and when I tried to offer a comforting caress, he snapped a warning bite at me. Fair enough. "Not now, Mom!"

So now we're in recovery. And I can't help but wonder if he'll leave bumblebees alone in future, or if he's plotting revenge. 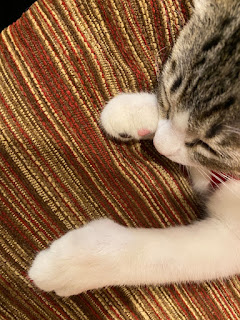